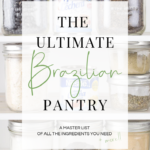 Trying to find the right ingredients to cook Brazilian food outside of Brazil can sometimes be frustrating. The worst part is, sadly, certain ingredients will actually be impossible to find outside of Brazil, others may be easy to find in certain parts of the world, but not so easy in other parts.

I’ve done the legwork for you and I put together this master list to help you stock the Ultimate Brazilian Pantry wherever you are in the world!

When I first moved to the US, the simplest Brazilian dishes were a major nightmare to put together. I didn’t know how to properly translate some of the ingredients – Condensed milk was an easy one, but who knew that creme de leite em lata, would be called table cream in English, and that evaporated milk is definitely not the same thing!!?  *Shrug* Ohhh the lessons I’ve learned…

After 15+ years living abroad, I’m happy to say that most things I need to cook a Brazilian meal are actually pretty easy to find these days (thank you Amazon!), or they can be substituted without too much fuss with easy to find ingredients you can buy from your local store.

I’ll be keeping this list up to date as we go along, so check back often to see what’s new!

If something is missing from this list, or you can’t find something specific in your country and region, please leave me a note in the comments and I’ll figure out a way to help you out!

Now, tell me in the comments:

Are these items easy to find in your area?

Key Brazilian ingredients & where to find them

Rice, primarily white rice, is a big staple in Brazilian cuisine and is largely served as a side dish to a lot of classic Brazilian dishes. Any long grain white rice should work perfectly (and brown rice is a hearty and healthy substitution as well). You’ll also find parboiled, black, red rice etc in Brazilian grocery stores and menus all over the country.


Beans are another classic Brazilian ingredient, but the type and color of the beans will vary from region to region. In Rio, where I’m from our go-to is the black beans, but the most consumed beans in the country is the pinto!

Yuca, Mandioca as we call it, is known as the mother of Brazil, and is probably the most Brazilian of all ingredients! We have historically eaten the root itself, and thanks to some brilliant indigenous skills, we have also been consuming numerous of its bi-products as well, such as yuca flour and starch. In Southern California I usually find yuca at my local Whole Foods Markets, and/or Sprouts. Amazon sometimes has it as well.

A major bi-product of yuca root, yuca flour is widely used in Brazil. Farofa is the most popular dish prepared with yuca flour. Here in SoCal I’ve never been able to find yuca flour in regular grocery stores, but they’re easy to find in Brazilian specialty markets and Amazon.

Table cream, creme de leite de lata, is another key ingredient that sometimes, but not always, can be substituted by fresh cream – depends on the dish. Table cream is used in both sweet and savory dishes. In US stores, you can find table cream cans, also known as media crema, in the latin isle of your major grocery stores… should I mention Amazon has it too? 🙂

Try it in a recipe:
Pave – No Bake Chocolate Pie

Tapioca starch is made from yuca/cassava root. It’s a product of the milky liquid extracted from the yuca in the cassava flour making process. This liquid is decanted and the white sediment that separates from the water is the tapioca starch.

Linguiça calabresa is a very important ingredient in Brazilian cuisine. We use it in a number of dishes, including our traditional Feijoada, and it add smokiness and depth of flavor to many dishes. Linguiça calabresa, is primarily made of pork, garlic, calabrese peppers, salt and sugar.

Try it in a recipe:
Caldo Verde – Portuguese Green Soup

Açaí (pronounced ah-sigh-eee) is a tart tropical fruit common in the Amazonian region, popular all over Brazil and now the world! Generally speaking, in northern Brazil people use açaí to make savory dishes, while in the south it’s consumed sweet. In the US and other parts of the world, it’s fairly easy to find açaí puree in the freezer isle of most grocery stores and/or online.

Try it in a recipe:
Acai Bowl

Cachaça is a Brazilian distilled liquor made from the fermentation of raw sugarcane juice. It’s the liquor used to make Brazil’s national cocktail – the Caipirinha! Nowadays it’s pretty easy to find cachaça in liquor stores such as BevMo, and even smaller local ones too. I’ve even seen it in grocery stores like Vons.

There are plenty of online stores who sell them as well – just google where to buy cachaça and google will show you online stores where you can order from and local options as well. Also, when in doubt, your local Brazilian markets will have it for sure!

Try it in a recipe:
How to Make Caipirinha