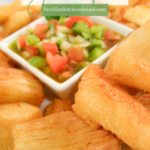 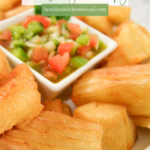 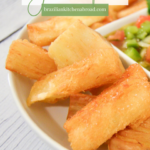 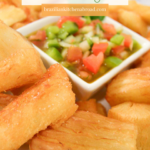 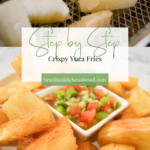 The word of the day today is Mandioca! Or manioc. Or… cassava, aipim, macaxeira… tongue twisters, huh? Well, these aren’t even all the names this awesome tuber is known for. In the U.S, the name you hear most for this Latin American potato-like root vegetable is yuca. But what’s really cool about yuca is that it has as many uses as it has names! And because it’s so important in Brazilian cuisine, I created a miniseries to show you what you can do with yuca. WOOT WOOT!!

Yuca is super versatile and you can make a ton of delicious recipes using the root itself, such as purees and fries, or you can use the starch to make breads, puddings, and even cakes!

But Wait… is it Yuca or Yucca?!

It’s Yuca!  With one ‘c’. Our friends at The Kitchn already explained well. In a nutshell, yuca with one ‘c’ and pronounced ‘yoo-kah’ is the edible root vegetable (shown in the picture above and all over this article). Yucca with two c’s, pronounced yuh-kah, is some other plant I don’t know anything about.

Mandioca is the Portuguese name, and what I gravitate towards using. So, get used to that name too.

A Couple of Things About Yuca

Since this is the first post in the series, I will tell you a little bit about what I know and think is relevant about mandioca (but remember, I’m only here for the food, you know, as in most cases. If you want to learn more, check out my list of references at the bottom).

So yea… it is true, you guys, mandioca has immense cultural AND historical significance in Brazil.

Check out this super cute story!

According to indigenous legend, the Mandioca has been named after a little Tupi (a native Brazilian Tribe) girl named Mani. The story says Mani was born very white and was the light of her tribe ever since she was born because of her happiness. One day, the little girl Mani became unexplainably ill and died quickly after, leaving the whole tribe devastated. She was buried in her oca (Tupi word for house), where her loved ones would come to mourn her death. They loved Mani so much, so they cried until the ground was wet, covered in their tears. Weeks after, a plant with a root brown on the outside, and white on the inside (like Mani!!!) grew exactly where the little girl had been buried, which they believed to be a gift of god.

Soooooo, guess what?!! The tribe named the plant Mani-oca in honor of the little girl. Awwwwwwww!!

Who knows if any of this comes even close to any kind of truth… I want to be believe it does, because Mani’s story is just so sweet. But, as far as real life goes, there seems to be some debate regarding where mandioca is originally from. Some say it’s from central America, where it began to be cultivated and then its use spread across the rest of the Americas. Others (including me – I mean, Mani, hello!!) believe it’s a root from the Brazilian Amazon region, and its cultivation and culinary use spread across the country, and throughout the Americas, way prior to the arrival of the Europeans.

The point is, our indigenous people had already been using mandioca as a major source of energy in their diet since like, everrr. When the Portuguese arrived in Brazil, they were very impressed by how the natives utilized mandioca. They learned the processes and incorporated in their diet too. And that, my friends, helped the Portuguese explore further (as in, eating mandioca and its products, gave the Portuguese the energy they needed to continue to explore and eventually colonize the Natives who, ummm… you know… history stuff…).

Aaaannnnd, during colonial times, mandioca also became the main source of energy to slaves, especially in flour and starch form. Fast forward to today and mandioca is still a staple of Brazilian culture and cuisine – so much so, many call it, the mother (or queen) of Brazil.

There’s more to say about the importance of yuca in Brazil, but I think, for the purpose of this conversation, let’s just leave it right here, yes?

Okay, so let’s shift focus back to what we all came here for… THE FOOD!  But, check out the other posts in this series to learn a little more and see what else you can do with this super versatile root veggie!

You can easily find yuca in most regular grocery stores, in Asian or Latin American specialty markets and of course, Amazon. This post from Food52 gives you some info on what to look for when buying yuca, as well as how to store it. The rest, I’ve covered below.

If you’re using a fryer, you can make sure it’s all set up now, and heating up. If you’re frying in a pan, just add the oil to the pan and leave it over low heat, just so it warms up, but not too hot to get to temperature too fast. I highly recommend you use a thermometer to help you maintain the temp at 350F.

Then you can just chunk them, like this… nothing too fancy.

Like potatoes, mandioca can oxidize and turn ugly as heck. To avoid that, make sure you keep the peeled ones in a bowl full of water as you work through.

The best way to get magically crispy yuca fries is to parboil them first. To be honest, I more than parboil, I actually cook them all the way through (but not toooooo much).  This way the edges sorta disintegrate in the fryer and the result is super awesomely crunchy yuca fries.

Put the chunked yuca in a pot, cover with water, add little salt, and boil until semi (parboiled) to fully cooked (cooked all the way through). Like this!

TIP: Sometimes I make everything up until this part and then refrigerate for frying a couple of days later. This saves some time if you’re making yuca fries as an appetizer for a party, which you totally should!!!

Then, drain all the water. Then, pat them dry with a paper towel to avoid too much splashing when you fry them. Arrange them in the fryer, or frying pan to fry.

Fry until golden brown and magical!!

Let them drain a little bit of excess fat in a paper towel, season with salt.

And eat yuca fries as a snack, dipping on some Brazilian salsa

Or with a meal

Don’t forget to subscribe today and stay tuned for upcoming posts in this series to see what else you can do with yuca! 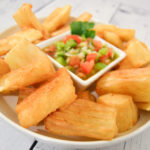 **if you cook them all the way through, make sure the yucca is still firm – you don’t want them to be too cooked/dismantling as if for a puree, for example