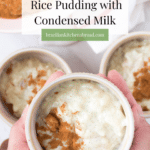 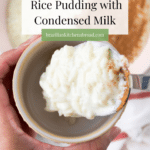 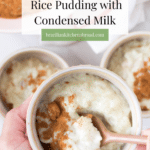 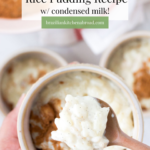 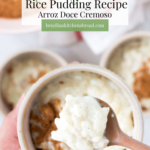 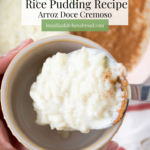 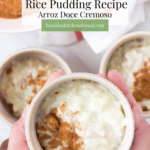 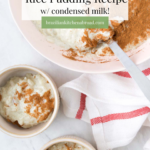 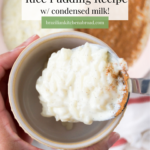 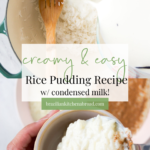 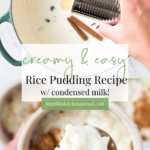 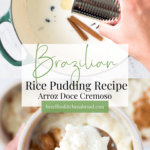 This deliciously creamy and easy-to-make Rice Pudding recipe is perfectly spiced and sweet, thanks to condensed milk. Known as Arroz Doce Cremoso in Portuguese, this Brazilian Rice Pudding with Condensed Milk is ready in less than 30 minutes. It’s a cozy dessert or snack that’s great for a cold day. Serve it as is or with a generous dusting of ground cinnamon for extra flavor!

Why I love this Easy Rice Pudding recipe

I can’t really say we had proper winters growing up in Rio. But, the moment it stopped being horribly hot outside or on a rainy day, my mom would make us this comforting Arroz Doce Cremoso recipe.

Well, her recipe was a little different. She didn’t use a whole vanilla bean or cinnamon sticks (this stuff is expensive!). But, here I am, a culinary school grad taking her already great recipes and adding my adaptations to them! Sorry, mãe!

That said, you also don’t need to use them, and I have information below on how to substitute!

Whatever you use, you’ll end up with a perfectly sweet and creamy rice pudding that comes together extremely quickly.

And this is a pretty forgiving recipe, too. Just stir often to make sure the rice doesn’t burn on the bottom of the pan. Otherwise your whole pot will taste burnt!

I like to serve this creamy dessert with an ignorant amount of ground cinnamon on top – though it’s perfect straight out of the pot as is!

I hope you love it as much as I do!

Make sure to scroll all the way down to the recipe card to get the exact amounts for these ingredients!

Brazilian Kitchen Abroad is a participant in the Amazon Services LLC Associates Program, an affiliate advertising program designed to provide a means for us to earn fees by linking to Amazon.com and affiliated sites.

In addition to these ingredients, you’ll need a few tools, too:

How to Make Rice Pudding with Condensed Milk

If you decided you’re going to be using a whole vanilla bean, yasss! Go you!

If you need help with what to do, it’s easy.

Simply lay the vanilla bean flat on a cutting board. Then, using a sharp knife, slice it to split open the pod.

Then use the back of your knife to scrape the itty bitty beans from inside the pod, like in the photos below.

Take the empty vanilla bean pod and safely fold it at the bottom of your knife and slide it up. This helps you grab as many seeds as possible from the vanilla bean. After all, you did pay a lot of money for it, so you might as well use it as efficiently as possible!

You can use all the vanilla bean seeds you can get out of the pod, as well as the pod itself. This will help pack a lot of delicious vanilla flavor into your pudding.

I like to add the vanilla bean seeds and pod into the milk while I’m prepping, so as I’m working through the rest of my ingredients, the vanilla is already working its way through the milk.

That was the hardest part! And it was’t hard at all—admit it!

Now measure the rice into the pot. I like to use a Dutch oven for this so my rice has plenty of room to expand without me worrying that my pot is going to overflow.

Cover the rice up with 2 cups of water to cook it.

You’re going to bring the water to a boil and then cover the pot, like you would with any other rice recipe.

Lower the heat to low and keep the pot covered until the rice is cooked through, about 10 minutes.

The good thing about creamy rice pudding is, while we don’t want to overcook our rice, if you do, it’s fine. We’re going for creamy, so this is an extremely forgiving recipe!

When the rice is cooked and tender, pour in the milk and sweetened condensed milk. Measure in the whole cloves, vanilla bean, cinnamon sticks and the pinch of salt, too.

Do not add the heavy cream yet.

Cook over medium heat until nice and creamy, stirring occasionally to prevent the rice from sticking to the bottom of the pan.

When creamy, about 20 minutes in, pour in the heavy cream and stir to combine.

When it starts to want to boil again, it’s officially done. Off the heat it goes!

Then fish out all the spices—the 5 cloves, the 2 cinnamon sticks and the vanilla bean pod.

This should be relatively easy because the pudding is white, and you’ll be able to spot all of them easily!

The pudding is creamy the moment you finish cooking, and it’ll get even creamier as it cools!

Serve warm with ground cinnamon on top, or plain.

How to store Arroz Doce Cremoso

You can serve this rice pudding recipe cold or reheat it for a few seconds in the microwave, if desired.

If you want to thin it out a tad after refrigeration, you can add a splash of cream or milk, but keep in mind that will alter the sweetness a little.

FOR MORE BRAZILIAN FOOD INSPO, BE SURE TO FOLLOW ME ON 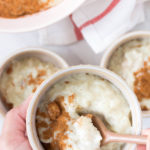 This deliciously creamy and easy-to-make Rice Pudding recipe is perfectly spiced and sweet, thanks to condensed milk. Known as Arroz Doce Cremoso in Portuguese, this Brazilian Rice Pudding with Condensed Milk is ready in less than 30 minutes. It's a cozy dessert or snack that's great for a cold day. Serve it as is or with a generous dusting of ground cinnamon for extra flavor!
Course: Dessert, Snack
Cuisine: Brazilian
Keywordkid friendly
Prep Time: 5 minutes
Cook Time: 20 minutes
Total Time: 25 minutes
Servings: 6 Servings
Calories: 213kcal
Author: aline_shaw

How to store: Measure the rice pudding into a container and cover with plastic wrap, pressing on top of the rice pudding to avoid a film from forming on top. Let it cool completely and refrigerate. You can serve this rice pudding recipe cold or reheat it for a few seconds in the microwave, if desired. If you want to thin it out after refrigerating, you can add a splash of cream or milk. This will alter the sweetness a bit.